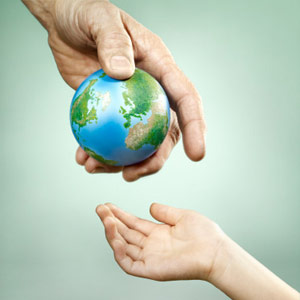 I was first introduced to the idea of climate change and global warming back in 2006 when Al Gore’s An Inconvenient Truth was plastered on every billboard imaginable. As a thirteen-year-old, I was woefully unaware of how much our species was polluting our atmosphere and oceans. What stuck with me the most was how dire the situation seemed and how little people seemed to care about it. However, this was in 2006, and ten years later climate change has become one of, if not the, most important political topic worldwide.

Environmentalism and the climate only really became important to me in college. As I made my way through political science courses and a semester at the United Nations, climate change seemed to be a growing problem that would soon become a catalyst for many of the geopolitical issues we see today. I, however, did not spend my childhood in a world where climate change is front and center on the news, social media, school programs, films, and much more. It’s almost impossible for children in America to not have at least heard of climate change. What’s more, the information frequently circulated on climate change heavily focuses on current and future impacts.

Videos of storms ravaging entire cities, massive floods, prolonged droughts, uncontrollable forest fires, and ice sheets melting, all paint a very bleak future, especially for children. What kind of effect will this have on upcoming generations?

At the very least, we can be satisfied that children are being taught the truth instead of being fed lies. If humans as a species are going to last another 200 years, we need new generations to be brought up understanding the hurdles ahead of them. Luckily, the concept seems pretty simple for kids to understand. Even the young granddaughter of climate change denier Sen. Jim Inhof (R-Okla.) comprehends the gravity of the situation. She asked her grandfather, “Popi, why is it you don’t understand climate change?” The fact that the grandchild of a climate change denying US lawmaker has a firmer grasp on reality is incredible, and the irony is palpable. What isn’t funny or ironic is that Inhof is the Chairman of the Senate Environment and Public Work Committee, especially since his granddaughter would most likely have more progressive ideas for a sustainable America.

Should we, however, be burdening these children with the horrors of climate change so early? Anxiousness regarding climate change has increased tremendously. Children grow up in a world where there is a bogeyman out to get them, an unavoidable monster that seems to only get stronger as we move towards a future where there’s a natural disaster every week. According to Dr. Anthony Levitt, the director of research in Sunnybrook Health Sciences Center’s department of psychiatry, “for most people who are anxious about climate change, the anxiety is escalated by the fact that they do not see an answer or way to make a change.” We should be wary of scaring a generation of young people into feeling completely helpless. If these upcoming generations cannot step up to the plate when the time comes to act, then we have doomed ourselves.

What we may need to do is begin to change the way we attack the problem of climate change, especially when trying to raise awareness. Much of the information being disseminated today still focuses on explaining the causes and effects of climate change, as well as the impending doom we all face if we do not act swiftly. However, what we rarely see is this type of media being tied to the massive improvements we have made to fight climate change. While I do agree that humans have not done nearly enough to alleviate our negative impact on the environment, perhaps a focus on what we are doing right will help steer our planet in a sustainable direction. We need to instill confidence in our children that they can stand up for what is right, and that, together, they can have a meaningful impact on sustainable progress.

If there is one thing to be learned from history, it’s that necessity breeds innovation. We certainly have the necessity, and from what I can see, there are currently tons of innovative new technologies that might very well be the key to unlocking a sustainable future for everyone. We must continue to warn today’s youth about the impact of climate change now, and the impact it will have on our collective future. However, if we permanently burn out a generation of potential environmentalists, who will lead the charge towards a sustainable future? If we can instill confidence in these next generations, there is no limit to what they can achieve for humanity.