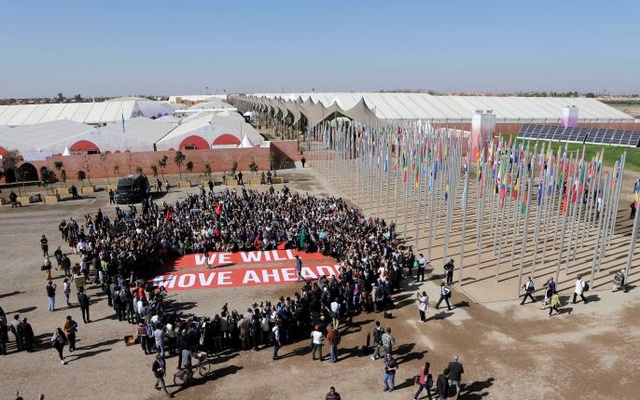 The uncertainty that has brought the US election to the climate action arena has prompted a loud and unified voice coming from Marrakech, Morocco, where the United Nations Framework Convention on Climate Change (UNFCCC) holds its 22nd Conference of the Patries (COP). This voice, which encompasses heads of states and respective representatives, civil society, private sector, and academia from more than 193 countries, asserts that climate action is now unstoppable. This is indeed good news, but…

what does it really mean for the millions of concerned citizens worldwide that ponder on the uncertainty created by the US election?

It is clear that the international community is sending a strong political message to climate change deniers and special interests. To solve humanity’s “greatest challenge” posed by the climate crisis, we will need more than politics for sure. However, as shown by history, politics and policies can be a driving force for progress or for peril. The Paris Agreement was a great example of a global consensus for climate action forged by the arduous work of governments of the world. This was to be the first step towards ending the climate crisis. The next logical step would be for governments to frame national policies and incentives that would ensure local action towards achieving their commitments to the Paris Agreement (also known as the Intended Nationally Determined Contributions – INDCs). This would inherently rearrange economic, social, and environmental activities towards averting climate change, more specifically the dangerous rise of global temperature by more than 2 degrees Celsius. Some countries would need economic help in this process and a Green Climate Fund was created hoping to gather 100 $US Billion a year by 2020.

the international community is sending a strong political message to climate change deniers and special interests.

So where do we stand so far? We have the political framework to move ahead and solve the climate crisis. However, the commitments by countries might not be enough and countries will need to commit to higher reductions of CO2 emissions according to the UN Environment’s Emissions Gap Report. We only have a little over 10 $US billion pledged to the climate fund in the first year, and the country with the largest amount of resources and biggest carbon footprint might abandon global efforts altogether.

Can we make climate action an unstoppable thing?

There is a clear state of accounts with regards to where we ware, and where we need to be. Sure, there is great hope. There are responsible private sector entities that have pledged to do their share. Financial markets worldwide are starting to internalize and account for the huge business risk that is posed by the climate crisis. Technological innovations continue to bring solutions. However, non of these good news are unstoppable. No single government, private sector entity, NGO, is unstoppable. What is unstoppable is the power of concerned citizens worldwide – concerned citizens that will not stand at ease while leaders and special interests seriously compromise the well being of our species – citizens of the world that come together with one voice and demand climate action now!