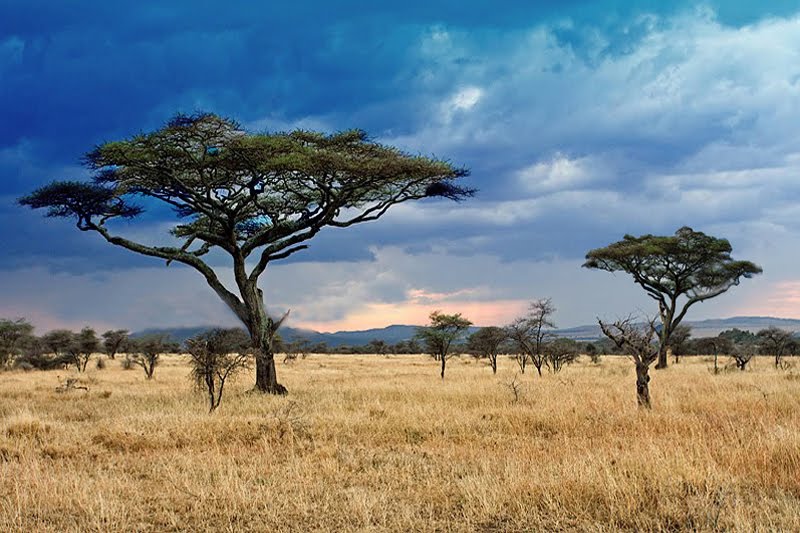 The savanna/grassland is an ecosystem found mostly on the African continent.  The Serengeti National Park in Tanzania is one of the most well known savanna ecosystems and it is home to one of the largest wild animal populations in the world. This area is suffering from the catastrophic global impacts of climate change. For example, increase downpour patterns across savannas is making plants grow taller and trees to grow as well. This makes increased shade coverage in the region, which causes endemic plants to die off; because the hardy conditions they are used to have changed. Once endemic plant life  dies off, animals which have adapted to surviving in this ecosystem die off as well. Usually plants that thrive in the savanna region have shallow roots, with more rainfall, there is an increased amount of soil degradation as well. This in turn will also have significant impacts in cities and towns whose current infrastructure is not prepared to cope with this type of climate.

Since the plants have shallow roots the increased rainfall can cause erosion therefore ripping plants out of the ground and degrading the top layer of the soil.  The loose topsoil can also lead to dangerous mud slides in populated areas.  This is not just an issue for animal life but for humans as well. When humans build, they use building codes and regulations for their buildings, based on what is most suited for the environment. As rapid weather changes occur, infrastructure might well suited to withstand it; which in turn can cause human loss. There is no real way to reverse what has been happening except for diminishing the effect we have on the environment in the future.

One of the things that can be done to address this issue ensuring that new infrastructure is more adaptable and resilient. For example, infrastructure can be built with proper drainage and irrigation, so that excess water does not flood the region and can be reused for other purposes.  In areas close to the savanna using the least amount of water possible will help to diminish the rainfall. This assertion is made based on the principle of the fresh water cycle. Another example is reintroducing native plants to the savanna, where they have gone extinct. This will help in reversing the soil degradation, and assist with savanna going back to its natural state.