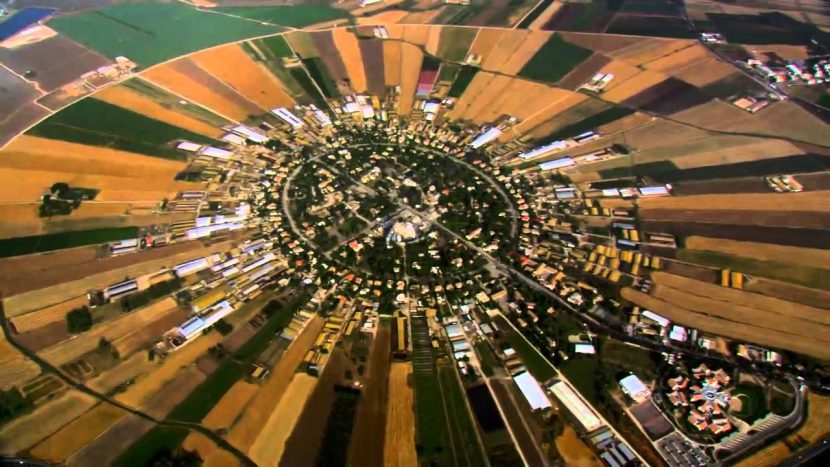 The concept that strikes me the most is the idea of a humans, and essentially humanity, as a disruptor. The earth is billions of years old and humans are only thousands of years old. So many factors had to be just right, one could even say precise, so that all we see and know today can exist. “Sharing is everything. Every living thing depends on another living being”. However, with the rise of civilizations also came the destruction of the natural balance. Humans maximize agriculture, create a surplus of food, but till the land barren. Humans consume beef and create internment like camps to feed that consumption. Moreover, we produce more meat than the animal can produce itself. On top of that, the rapid production of the cattle not only uses oil and natural resources it creates an excess of methane that destroys the atmosphere. This cycle continues due to the boom of agriculture. Instead of surpluses of food, there are surpluses of grain to feed cattle. Pesticides are sprayed to kill bugs, but leads to the growth of parasites. Every living thing depends on another, and humans are throwing off the balance of the living things around it.

“Sharing is everything. Every living thing depends on another living being”

At this rate, our natural resources will be used up and gone in less than a decade. It is as if we are so focused on getting immediate product, and not caring about how we get it, that we allowed ourselves to burn through the gifts the earth gave to us. “Is there another more sustainable energy source?” we simply go to the next forest or oil field and dry that source up. It seems somewhat insane to know that there is a balance among all things on earth, but we somehow manage to deplete the earth’s resources on land and sea. Yet, the earth still tries to show other sources of sustainable energy. “Where on the earth does the wind not blow?”. The answer? Nowhere. The wind blows everywhere. By using wind turbines, humans can produce electricity. It is clean and sustainable. Then we have the sun. The sun beams down almost everywhere on earth especially in drier, arid areas. Yet, solar panels aren’t lining fields to power the area around it. We have these clean sources but totally depend on sources that can and have run dry. For example, the city of Dubai is presented as the modern megalopolis. Dubai, however, is a city dependent on imports. Importing nearly every good is not inexpensive, but why can it due so? As one can foresee, and stated above, oil is not a bottomless resource. Oil wells have gone dry before and it can certainly do so again. Yet, Dubai receives an incredible amount of solar radiation everyday. Do solar panels line fields across Dubai? No. Our megalopolis and model of human advancement stands also as the best representation of mankind’s folly. We have essentially placed ourselves in a predicament that leads to extinction due to greed and ignorance.

It is strange how humanity’s effects on the world at large can be seen, but so far, the path has been the same. Ice caps melt, species go extinct, forests disappear, and we still continue in action because someone can make a profit. The idea of balance not only lends itself to the vegetation and resources but fellow humans as well. By being in a continual pursuit of wealth, we leave others in extreme poverty and force each other to live almost inhumanely. Populations boom in certain areas due to people looking to survive because the former land they lived on cannot give them anymore. This becomes more complex in issue when one realizes that a lot of those seeking survival had no active role in destroying their home. There are countries that hold some of the richest resources to offer, but 80% of the population lives below the poverty line. It doesn’t seem to make sense until that idea of balance is taken into account. One country may want a certain food, but does not grow it locally. It is not a problem to that country because it can import it. Yet, their appetite for one particular good can drive the country it imports it from into depleting their own natural homeland. Unsustainable agricultural practices are in fact being fostered by globalization and trade, and the consequences to the environment are dire.

Unsustainable agricultural practices are in fact being fostered by globalization and trade, and the consequences to the environment are dire.

We aren’t dead just yet and people are becoming more aware of what happens not only at home but across the globe as well. “It is too late to be a pessimist”. It is essentially too late to say “that is it”. We have a 10-year window before the effects like climate change become irreversible. In that time, there lies opportunities to fix and change what we have been doing. The simple fact that humans still live and breathe today allows for an opportunity to own up to the destruction we as a people have enacted upon the living home we have. It is too late to be a pessimist. It is too late to have this knowledge and sit back. It is too late to continue to watch as rivers dry, species disappear, and people fight to get basic necessities to live a life of dignity. The film shows there may be some hope as the pendulum swings back. Solar panel fields are appearing, wind turbines lay off the coasts of Denmark, and forests are becoming protected for the treasures they are. There are growing movements that advocate not just for their home, but the homes of strangers as well. We have reached an age where it is possible to force companies and groups who act irresponsible to face what they have done. People have the power to end a business if they are caught dumping, burning, and destroying. We, as humans, collectively know we can longer continue on this path, and if they don’t we can show them.

“It is too late to be a pessimist”